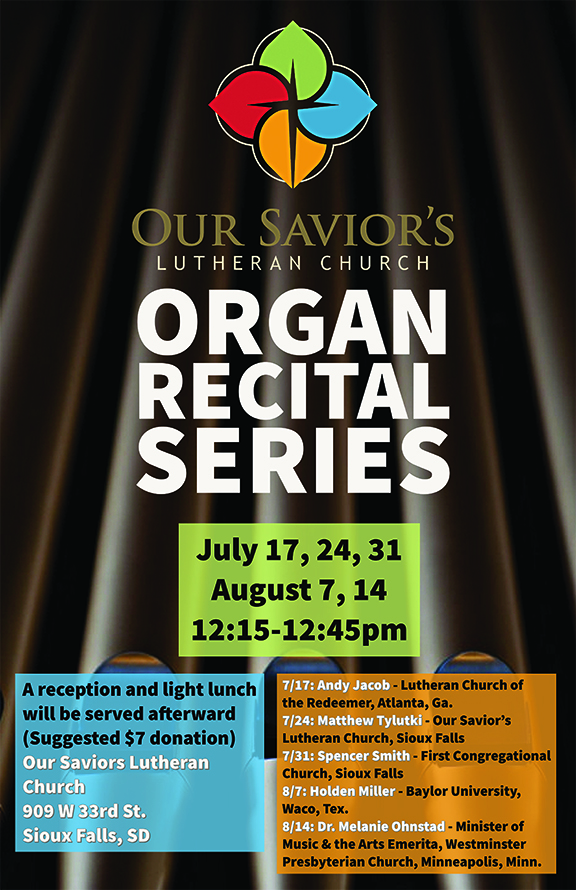 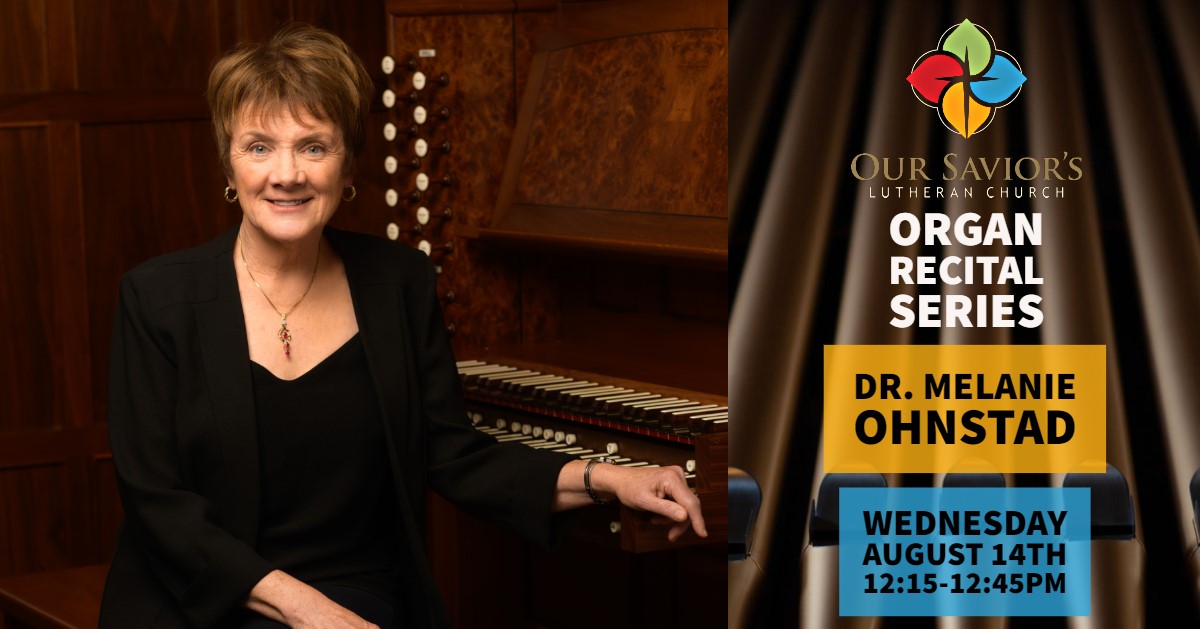 About Melanie Ohnstad, Minister of Music and the Arts Emerita, Westminster Presbyterian Church, Minneapolis
Melanie Ohnstad has been a church musician since her graduation from St. Olaf College in 1974. She led the music ministries of St. Stephen Lutheran Church, Wausau, Wisc.; Trinity Episcopal Cathedral, Phoenix, Ariz.; and Westminster Presbyterian Church, Minneapolis. In these positions, Melanie directed and accompanied choirs, assumed a significant role in liturgical planning, and was the primary organist for all services of worship. Melanie enjoyed over a decade as an assistant organist at St. Mark’s Cathedral, Minneapolis, participating frequently in the nationally acclaimed St. Mark’s Music Series.

Melanie received the Doctor of Musical Arts degree from the University of Minnesota. She was dean of the Twin Cities Chapter of the American Guild of Organists from 2006 to 2008, during which time the chapter hosted the AGO’s national convention. She has accompanied Minnesota choirs on three separate European tours and has made multiple recordings with Twin Cities choral ensembles. She has been heard many times on Minnesota Public Radio’s Pipedreams.

Melanie was named Minister of Music and the Arts Emerita during her retirement celebrations at Westminster last May. Her heart is full of gratitude for the 24 years of rich collaboration and musical opportunity in that progressive, committed downtown congregation. Going forward, Melanie will freelance as an organist. She and her husband, Philip Friedman, are eager to spend more time with their families in Colorado and California and explore nature and cultures in the U.S. and abroad. 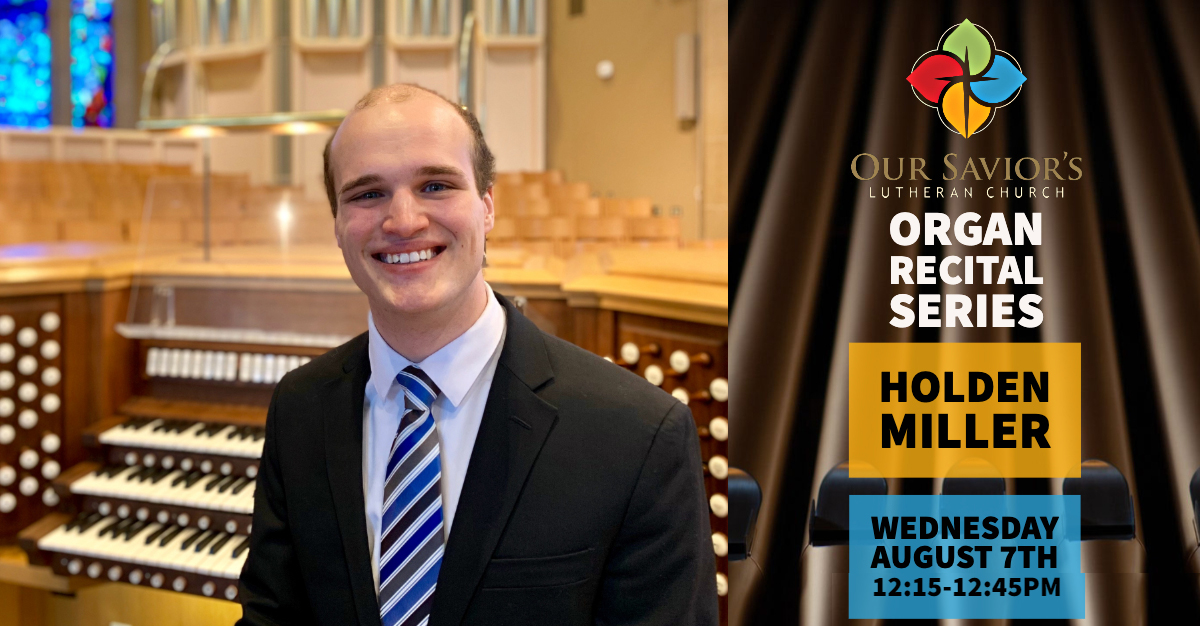 About Holden Miller, a graduate student at Baylor University and associate organist at St. Alban’s Episcopal Church in Waco, Texas
Holden Miller, a native of Greeneville, Tennessee, recently graduated from St. Olaf College in Northfield, Minnesota with his Bachelor of Music in Church Music and Organ as a student of James E. Bobb and Catherine Rodland. This summer he toured internationally to Norway with the St. Olaf Choir under the direction of Anton Armstrong. Holden is honored to have been part of the choir’s historic legacy that spans over a century, and most enjoyed the persistent level of detail that the choir works to achieve in order to provide worshipful music of the highest quality. Holden was always deeply intrigued by the music and liturgy of the Presbyterian church that he grew up in. The sights, sounds, and actions of worship ultimately led him to several years of piano lessons with Mrs. Ruth Thomas, the church organist, and then organ lessons by her recommendation. Upon her retirement, Holden continued his organ studies with Dr. David Hendricksen, who encouraged him to pursue his passions at St. Olaf. His love of liturgy and worship served him well as the sacristan of Boe Memorial Chapel on St. Olaf’s campus. He took pride in preparing the chapel and sacraments for Eucharist every Sunday and serving the campus chapel ministry as the student coordinator for the weekly service of Friday Morning Prayer. He enhanced the rich liturgy of Morning Prayer by featuring a diverse range of musical offerings by students and faculty as soloists and collaborative artists.

During his Interim term in 2017, Holden was a Church Music Intern at Trinity Episcopal Cathedral in Portland, Oregon, under the mentorship of Canon for Cathedral Music, Bruce Neswick. In that capacity, he played and accompanied during services, directed the choir and choristers, and gave recitals in both Portland and Seattle. This internship cultivated a desire for Holden to pursue church music of the highest caliber and demonstrated how to create a collaborative environment at a refined level for all ages. Holden discovered a passion for working with children’s choirs when he served as an intern assisting Mrs. Joanne H. Rodland with the children’s choir at St. John’s Lutheran Church in Northfield, Minnesota. Mrs. Rodland has been incredibly influential in his approach and methodology for leading, developing, and nurturing children’s choirs by combining curriculum by the Royal School of Church Music America (RSCM America) and the Orff-Schulwerk Method. This past year Holden served as a Church Music Scholar at Normandale Lutheran Church in Edina, Minnesota, under David Clarke and John Ferguson. Sacred music continues to take Holden around the world—he has sung Mass at St. Peter’s Basilica in Vatican City with the Greeneville High School Advanced Chorus under Kathryn E. May, Mass at Notre Dame Cathedral in Paris, and a week-long residency at St. Paul’s Cathedral in London along with the Trinity Cathedral Choir of Portland, and, in the summer of 2018, he enjoyed touring northern Germany with the St. Olaf Organ Studio. Making the pilgrimage to these historic sites has been impactful on Holden because of their sheer beauty and historical significance. The insight they have provided clarify both perception and performance practice of the music being performed.

In 2017, Holden was a featured young artist in the Wiener Memorial Organ Series at Central Synagogue in the heart of Manhattan. Last summer he was an organ scholar at the RSCM Pacific Northwest course in Portland, Oregon, where he was fortunate to be mentored by and collaborate with Dr. Patrick Scott as course organist from the Cathedral of St. Philip in Atlanta, and Sarah MacDonald as course music director from Selwyn College in Cambridge. As a promising young musician dedicating his life to excellence in church music, Holden was awarded the 2018 Don Marler Church Music Scholarship, honoring Marler’s 36 years of service to West End United Methodist Church in Nashville, Tennessee. Additionally, Holden is also honored to be recognized as the 2018–2019 Rodland Scholar. The Rodland Scholarship is awarded to a promising church musician at St. Olaf in honor of the life and legacy of the late Rev. John R. Rodland, who served alongside his wife as a Minister of Music at West Side Presbyterian Church in Rutherford, New Jersey, and contributed extensively to the Presbyterian Hymnal (1990). Next year, Holden is excited to study with Isabelle Demers, pursuing a double masters in organ performance and conducting at Baylor University while serving as associate organist at St. Alban’s Episcopal Church in Waco, Texas. 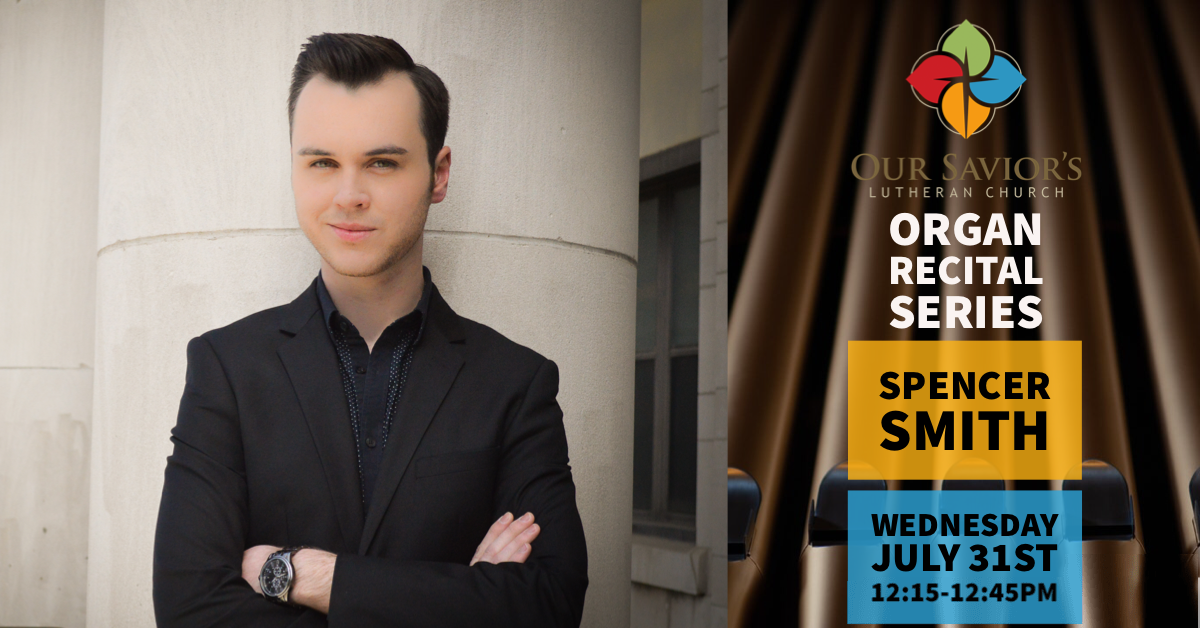 A Sioux Falls resident and South Dakota native, Spencer is the Organist and Director of Music at First Congregational Church in Sioux Falls. Prior to moving to Sioux Falls, he was the organist at the Vermillion United Church of Christ, Congregational for four years. He also enjoys his time as a collaborative pianist, working with multiple choral ensembles, festivals, state competitions, singers and instrumentalists in the Sioux Falls area.

Joining Spencer for this recital is Natalie Campbell, Soprano Soloist
Natalie Campbell currently teaches voice at Augustana University and the University of Sioux Falls. She holds a Master’s degree in Vocal Performance from the University of South Dakota, where she studied with Dr. Brandon Hendrickson. While at USD, she was the winner of the university’s annual concerto competition and performed the roles of Dido in Purcell’s Dido and Aeneas and Monica in Menotti’s The Medium. She also received a B.M. in Piano and Vocal Music Education from Houghton College in New York, and has pursued graduate studies in Piano and Chamber Music at Rice University in Houston, Texas. 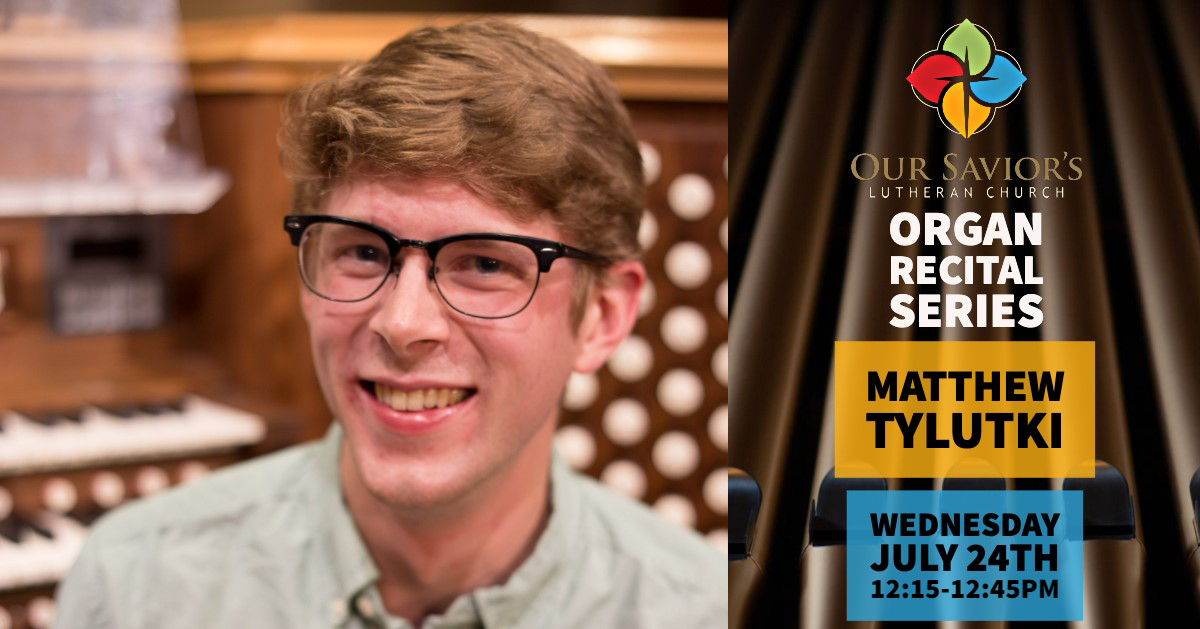 About Matthew Tylutki, Principal Organist,
Our Savior’s Lutheran Church, Sioux Falls
Matthew, from Austin, Minnesota, is a graduate of St. Olaf’s class of 2018 with a degree in Instrumental Music Education. While at St. Olaf, he studied trumpet with Dr. Martin Hodel, and served as the trumpet section leader of the St. Olaf Band. In the midst of preparing to be a music educator, Matthew also found a passion for the pipe organ, taking lessons with Dr. Catherine Rodland.

Through his study of the organ, Matthew has had many opportunities for performances and service playing around the Twin Cities area. Notably, he held the position of Music/Organ Intern at Westminster Presbyterian Church in Minneapolis, where he studied service playing and choral accompaniment with Dr. Melanie Ohnstad. As a performer, Matthew has given recitals in Northfield, Plymouth, and St. Paul, and he looks forward to his Sioux Falls debut as a recitalist this summer.

In the fall of 2018 Matthew accepted the position of Principal Organist at Our Savior’s Lutheran Church in Sioux Falls. He has enjoyed stepping into the strong musical tradition at Our Savior’s, and collaborating with area musicians throughout the past year. In addition to his role as organist, he teaches a studio of piano and trumpet students, and accompanies music students at Augustana University. 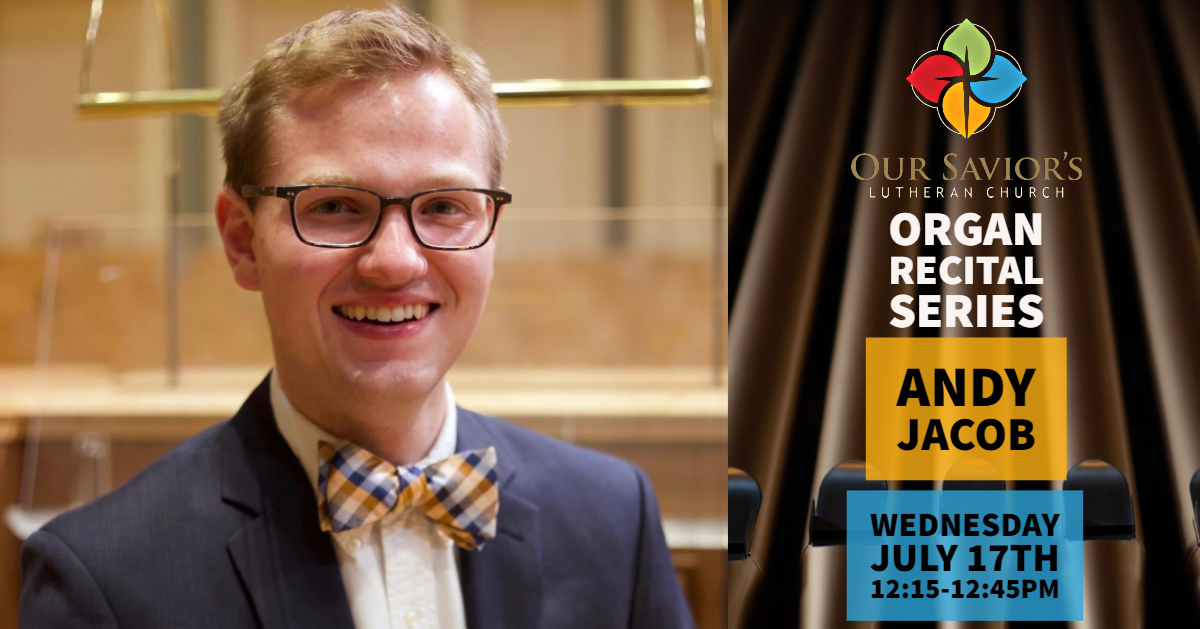 About Andy Jacob, Organ Scholar at
Lutheran Church of the Redeemer, Atlanta, Ga.
A native of Minneapolis, Minnesota, Andy graduated in May 2018 from St. Olaf College in Northfield, Minn., with a B.A. degree in music. Andy began his organ studies his freshman year of high school and continued study at St. Olaf under Catherine Rodland (repertoire) and James Bobb (service playing). After graduation, Andy was hired by St. Olaf as the Interim Cantor to the Student Congregation for the college’s 2018 fall semester while James Bobb was on sabbatical. In this role, he planned and oversaw the music for the college’s six weekly services, serving as the organist for several of the services each week including Sundays, conducted a schola that led the music for the Friday morning liturgy, and regularly composed liturgical music for the college’s choirs.

After finishing his tenure at St. Olaf, Andy moved south to serve as the inaugural Organ Scholar at the Lutheran Church of the Redeemer in Atlanta, Georgia. At Redeemer, he assists Organist and Children’s Music Director Sarah Hawbecker with service playing, leading the children’s choir and youth choir and accompanying the adult choir. In August, he will begin his studies for a Master of Music degree in organ at the University of North Carolina School of the Arts under Timothy Olsen.

Andy’s greatest joy at the organ console comes when he’s leading the worshiping congregation in song. This deep passion for hymnody has led him to be invited to design and play hymn festivals around the country in both Lutheran and other denominations. His playing has been aired on St. Olaf’s internationally syndicated sacred music radio program, Sing for Joy.