by Communications | May 27, 2016 | Publications, The Intercom Newsletter | 0 comments 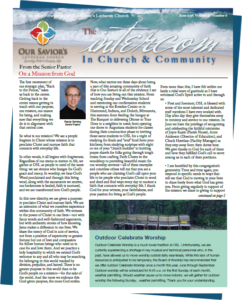 The June Intercom Is Online!

The June 2016 issue of The Intercom, monthly newsletter of Our Savior’s Lutheran Church, is available for reading or downloading here.

Use these links to navigate directly to the sections of The Intercom that most interest you:
From the Senior Pastor
Congregational Life
Youth and Family
Education
Caring Ministries
Health Ministries
OSL Women of the ELCA
Stephen Ministry
OSL Library

As of the May 2014 issue, The Intercom has a new magazine-style format and a new design that is clean, sharp, and readable. Paper copies of The Intercom are mailed on request. This is an effort to be better stewards of several resources, including paper as well as printing and mailing expenses. If you wish to receive a paper copy of The Intercom, call the Church Office, 336-2942, or e-mail breynolds@oslchurch.com.